Recollection of City Formation & Other Stories

It was about that time period of 1952 when the South Lindbergh Association was formed. A neighbor of ours who lived on East Watson, by the name of Joseph Von Gruenigen. He and I became very good friends and worked diligently through the South Lindbergh Association. At that time whenever there was a suggestion of a change in zoning, the only way we could protect ourselves was to rush to Clayton and appear before the county council and plead our case. We organized, through the South Lindbergh Association, an arrangement where there was 1 person whose responsibility it was to make every one of the neighbors (on that particular street or road on which we lived) aware of what was going on and be sure to encourage them to show up at the county council meetings and object to whatever propositions were on the table that were injurious to our particular area. Remember, we were unincorporated and that was the only recourse, the only thing we could do. Well, we appeared a number of times. Sometimes we were helped and sometimes we were not. One particular time there was a proposal to build an asphalt plant at Watson and Lindbergh on the southwest corner of Watson and Lindbergh. Well, this really, really stirred up a lot of interest and we had, I’d imagine, a couple hundred people who showed up at the county council meeting. Previously we had decided that eventually we were going to have to incorporate in order to protect ourselves, and had prepared articles of incorporation. Five men, I was one of the 5, were involved in this arrangement. So, this proposal came up for the asphalt plant. We appeared at the county council. The decision was held in abeyance, so when we got out of the council meeting the first thing we did was to make arrangements for the leader of our group….I can’t remember his name now,…but, he presented a petition for our articles of incorporation, which were drawn already. The county supervisory eventually granted us the right to become a city. Luman Mathews was county supervisor at the time and he appointed a mayor, 6 aldermen, and a collector. I was appointed the first collector. Well, there were many, many times, especially in the first meeting, that we had absolutely no money. The fellows that were appointed all pitched in $250 to get started and, of course, never expected to get it back, nor did we. We didn’t even have money to buy postage at that time!

Our first mayor appointed became very ill. He died of a heart attack before he could ever assume office. His name was Kuhlman. His son’s name is Dr. Robert Kuhlman. Mr. Kuhlman, I can’t remember his first name, was appointed by Leland Mathews along with the rest of the members of the board and collector, unfortunately, before he was even ever able to assume office he died. As provided by law, the appointed board was then in a position to appoint someone to serve as mayor for the interim, until the first election. We got together and the fellows decided to appoint Al Kitun, as the first mayor. I, of course, was the first collector. At the first election I was elected as aldermen, and then subsequently ran as alderman and was elected as alderman. I served as collector from 1957, from 1958 to 1968 I served as alderman, and from 1968 to 1974 I served as mayor for the city of Sunset Hills. I was very proud to have been selected as one of the mayors of our city. While I was mayor I was instrumental in forming the first Sunset Hills Police Department, which is still viable and still functioning. My son, Roger, helped me an awful lot. More than once he stood outside, a couple of times in a snowstorm. The elections were always around the first of April, and Roger faithfully would help me, often standing out in a snowstorm handing out brochures, supporting his father who ran for alderman, and then later mayor. I was very happy and excited being able to serve our city. When we originally were elected, we were “$1 a year” men. That’s all we were paid. I was the 1 who suggested a dollar a year as our pay. First of all, I doubt if we could have paid any more than that! Secondly, the fellows that were elected were dedicated. They weren’t looking for how much they could get paid. They were anxious just to be able to help our newly formed city. Later, a motion was made and passed (this was a number of years later) and we were paid $100 a month for alderman, and $125 a month for mayor. Still later, after I was no longer involved, they raised the salaries to the present level, to which I objected vehemently.

While I was involved in the formation of the city and the original elections there was a very interesting and unpredictable citizen by the name of Walter Dienstbach. He had a couple of acres over on Weber Hill Road. He had a gun, which he fired more than once when he felt insecure. ‘Course, in those days there was hardly any traffic, hardly any cars, very narrow roads. The activity was negligible. He had a couple of horses and he was overly protective, so if anyone would get anywhere near his property it wasn’t out of the ordinary to hear Wally firing a gun. One time, while I was mayor, Wally walked in with a petition. He had about 30 signatures on the petition (I never will forget this) and asked for an audience. So, I said, “Of course, Mr. Dienstbach. I’d be glad to put you on the agenda” which I did. We invited him to come up front and I gave him the microphone and I told him, “Whatever you have to say, speak it out very clearly and very loudly so we can all hear what your petition is about.” Well, his petition was to have me impeached! I nearly fell out of my chair! I asked Wally, “How many signatures do you have?” He said, “Oh enough.” So, we introduced the petition into the records and I asked Wally, “Have you got anything else to say?” He said, “No, sir.” I said, “Well, is there anyone in support of your petition. I would appreciate having them stand and state whatever they have to say about the petition.” No one stood. There wasn’t anyone there, but Wally Dienstbach. So I said “Well, Mr. Dienstbach. Thank you so very, very much. You may now have a seat.” That was the end of the petition to impeach, and Wally left the room.

When we moved to our place on Robyn Road there was what was referred to as Manhattan Trail. It was just a…oh, you might say a walk through the woods from our place on Robyn Road over to Weber Hill Road. It was interesting to be able to take a nice walk through the woods over Manhattan Trail and visit the people on Weber Hill Road. One of the families we became very, very close friends with was the McGees. They owned a home on Weber Hill Road and I remember the first time that I went over…well, not the first time it was probably the second or third time I went over there…Mac McGee was cutting down trees. He had a chainsaw and he really was working up a storm. I don’t know how many trees Mac had leveled. Working like a beaver. They had a nice home on Weber Hill Road. The windows swing up and they were on hooks and you could have an ice view of the valley. Eventually the McGees sold that home and moved to another plot of ground in Sunset Hills and eventually moved to Chicago. We visited them a number of times. Then eventually they moved back here. 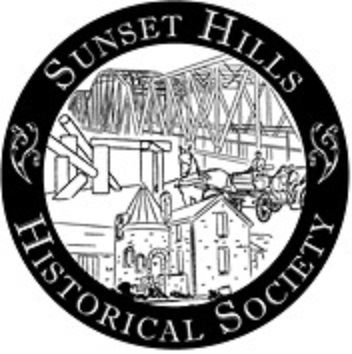